Soviet Architecture and legacy in Pavlodar

Pavlodar is a city located on the North of Kazakhstan. It was based in 1720 as Russian outpost where only 48 people lived. In 1862 it was renamed to Pavlodar. Then there were built a bank, school, mill, market, cathedral and mosque. In 1904 the city consisted from 33 streets and had 10 factories. In years under Soviet government Pavlodar was small provincial town with single story houses. When it became a regional center of the Kazakh Soviet Republic, in 1938, the city started developing. Now about 350,000 people live in Pavlodar. Most of the buildings in Pavlodar are old and were built in 19th and 20th centuries. One of the oldest building in the city is House of the merchant and mayor Artemy Derov. For about 70 years the building was used for Local Lore Museum. The exterior of the building is designed in classical style of 19th century and colored in orange, white and red colors. The House is located near to river on Lenin, 149 Street. In 1957 cinema theater called “Oktyabr’” was opened in Pavlodar. The building was designed in a minimalistic style in white color. ‘Oktyabr’ in Russian language means “November”. The opening of the cinema was timed to coincide with the 40th anniversary of the October Revolution. In 2012 the building was used as the Dostyk concert hall. After restoration concert hall was designed in classical style and colored in light-green color.

The building of Pavlodar Tractor Factory was opened in 1977. Three-story building was white colored and had a fountain nearby, on the rooftop there was a billboard with communistic slogans. Nowadays, the place is used as Palace of the Culture. The glass building is holding concerts and governmental events there.

In the city center there is a three-story house, people call this it ‘shishk’ (сone). It wasbuilt in 1953 and was considered as the tallest building in Pavlodar for long time. 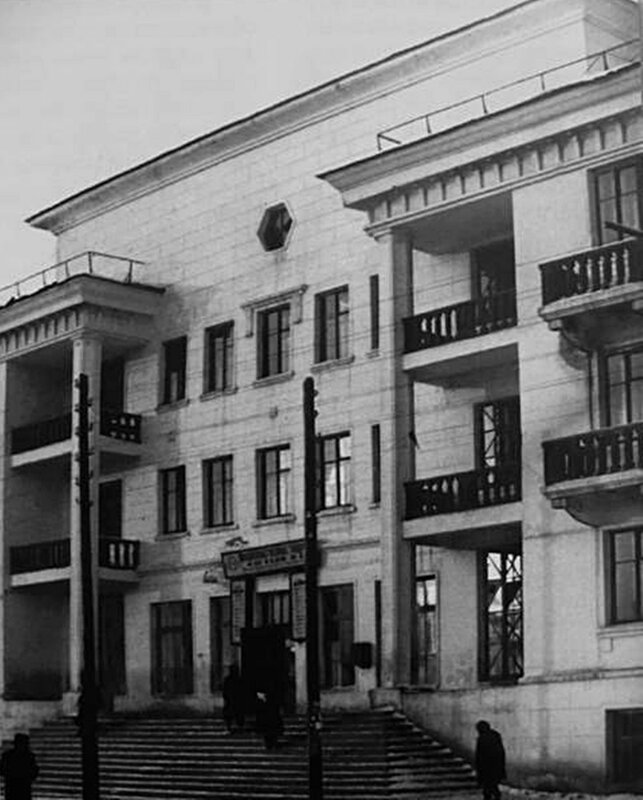 On Estaya Street, there is a building, the first floor of which was built from brick, and the second was built from wood. It was built in 1901 by the grain trader Mikhail Abramov, who rented the building to the agricultural school. Then, there was located the first communistic school of Pavlodar, in 1920. After 30 years a veterinary college began to work there. 20 years later, it was transformed into an economic school. In 1984, the building was owned by the Court of the Industrial District, and then to a commercial organization. Now, this building is used as Nur Otan party hub.

The post center of the city was three-story white and blue colored building. Now this place looks exactly the same, but the building is owned by ‘KazakhTelocom’ company.

There are many buildings that were considered as architectural and historical property, but now destroyed or are in a bad condition. One of these places is former ‘Russia’ hotel. It was luxurious and only scientists, writers and artists stopped there. From 1940 to 1960, the building was used by governmental committee. After, there was a hospital and then a dormitory. In 1990 the building burnt in a fire. Now this two-story ruins without windows is a home for homeless people.

Another place of the city that reminds of Soviet Times is Victory Park. There is a lot of monuments left since Soviet times. There’s a lot of monuments of the Pavlodar Heroes of the Soviet Union, which defended the homeland. The main composition of the park is eternal fire. The fire stopped flaming when there were the repair works.

The best natural spots to visit in the fall

Hall of Fame: Big Names of Kazakhstani People in Sport

Usually, when tourists visit Kazakhstan for the first time they expect to see only deserts and steppes, but there are also stunning...

Almaty or, as the locals used to call it, the Southern Capital is not only the largest city in Kazakhstan, but also the largest historical...

Kazakh national jewelries is a significant part of national culture and history. They reflect culture, the spiritual world and the...

Welcome to Kazakhstan! If you are here for the first time, you might wonder is there any other expats in the capital city? Are there any...